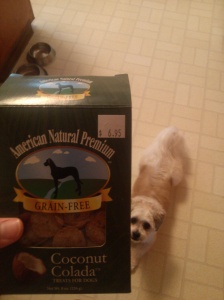 This afternoon I ate my mom’s dog’s Coconut Colada treats.

Not because I was starving and and the fridge was empty, cabinets bare.

Not because I sample all Sargent’s food before I give it to him because I fear someone is attempting to poison him (were anyone trying to do that … go ahead …. but I have a hard time imagining how murking a shiatsu / bichon mutt would be worth the effort).

And not for accurate ammunition for writing a complaint letter to the manufacturer in hopes of receiving free product.

Nope. I was simply curious

And how was it?

Surely better than civil-war hardtack, Gulag gruel, railroad camp rations, oregon trail packings or any meal available to the average citizen living before the 15th century (an age when people kept boxes of pepper in their front-entry as big middle-finger signs of wealth; when salt was such a wealthy commodity that governments employed salinators to guard against tax-skirting smugglers and of course when no one had thought to use replace bread with syrup-jeweled pancakes for egg and sausage sandwiches)

View all posts by Paul Christiansen